WASHINGTON – The Veterans of Foreign Wars of the United States provided six artifacts and personal effects to the Defense POW/MIA Accounting Agency today as part of its promise to help advance the noble POW/MIA missions. 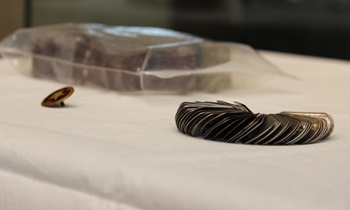 “Our VFW members, and their families, continue to answer the call in this very important effort to bring closure to those who lost loved ones during the Vietnam War,” said B.J. Lawrence, executive director, VFW Washington Office.

During July’s 120th VFW National Convention in Orlando, Fla., Lawrence, the former VFW national commander, asked Vietnam veterans to search through their closets and footlockers for documents that might help Vietnam to determine the fate of an estimated 300,000 missing Vietnamese, and personal effects that might help bring comfort to their families.

U.S. Air Force Maj. Gen. (ret.) Kelly McKeague, DPAA director, was overwhelmed by the show of support from our veterans, their families, and the American people.

“This is a two-pronged effect,” said McKeague. “Not only is there potential to find answers that families have sought for many years but it also advances our relationship with Vietnam. We have found over the last 20 years Vietnam has increasingly been interested in the recovery of their war dead. Every time we give them an actionable item, it just raises the level of their appreciation, and more importantly, their regard for our cooperation with them.”

“It is vital that we return any known artifacts, documents, and personal items back to the Vietnamese government, who have continued to foster a good relationship with the United States as we diligently search for our missing servicemen,” said Lawrence. “This display of diplomacy will only help in our efforts to reach our true goal and promise to our families affected by the Vietnam War – and that’s to achieve the fullest possible accounting of those Americans missing from the Vietnam War.”

Items collected by the VFW Washington Office will be turned over to DPAA.